What’s in a name? Apparently not much in my family. Because we seem to just make up strange new names and titles for each other as we see fit. And they generally stick.

Aunt Udy: Her name was Judy. She wasn’t my Aunt, but she was my mom’s great friend. So I guess that’s not terribly strange. But the Udy thing…apparently one day my mom and her friends were watching some movie where people don’t pronounce the letter “J,” and they thought it was pretty funny. Must have been when mom was pregnant with me, because they decided the she would be known to me as Aunt Udy. And she was.

Ciocha (pronounced Chuh-chuh): She was my Ukrainian Great Aunt. Her name was Jane. Ciocha means “aunt” in Ukrainian. So that one makes perfect sense. It’s just a strange name. She was the matriarch of our family and super-special to me, my mom, and my brother (this part will be important later).

Miken (pronounced Mike-En): He was my mom’s cousin. His name was Michael. He was married to a woman named Nita. My mom always referred to them as Mike and Nita. When I was very little I heard “Mikeneeta.” So, I thought his name was Miken. It stuck.

Pete: He’s my cousin. His name is Joseph. His middle name is not Pete or Peter or anything like that. Quite frankly, I’m not even sure why he’s called Pete. It’s just been that way for as long as I can remember.

Grandma Jo: Maybe not the craziest sounding, but definitely the strangest in terms of her title versus her biological relationship to me, which is nonexistent. She was friends with Mom and Aunt Udy. Her name is Mary Jo. She’s got a few years on my mom, and before I was born they joked that she was old enough to be my grandmother. So they decided that I’d call her Grandma Jo. To this day she is still “Grandma.”

There is a point to all of this aside from the fact that my family is strange.

A little over six months ago, just before my nephew was born, my brother and I were out to dinner with our parents. We were deciding what this baby was going to call me. We decided on “Ciocha,” because of it’s special meaning to all of us. That was easy.

Now, at some point years ago my brother gave Tyler the nickname “Uncle T.” It’s what he’s always called him. So, during this conversation little brother and I got excited because we figured Ty could now be a for-real “Uncle T.” I thought it was perfect and relayed the decision to Tyler as soon as I got home from dinner. He looked at me kind of indignently and informed me that he most certainly was not going to be called Uncle T. He would be Grandpa Jimmy.

When I raised a questioning eyebrow, he explained to me that since my family makes up names and titles out of nowhere, he would be doing it too. And he wanted to be Grandpa Jimmy. Through hysterical laughter I called my brother to inform him of the change. And Grandpa Jimmy was born.

My brother also has a step-son, Jacob, who is about two-and-half. These new names came about right at the time Jacob really started talking up a storm. And let me tell you what, it’s the coolest thing to get a phone call because “Jacob wants to say hi to Ciocha.”  Its just as awesome to see that little guy’s face light up as he yells “Jiiiiimmmmy” in excitement when Tyler walks through the door. I might not be doing the children thing myself, but I love being a Ciocha and watching Ty be a Jimmy to these fantastic little men. 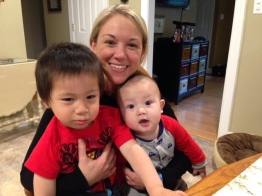 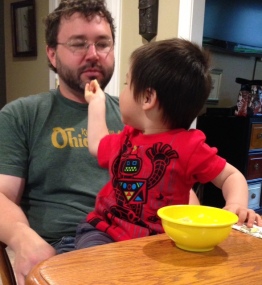 One thought on “Say My Name, Boys”

This site uses Akismet to reduce spam. Learn how your comment data is processed.